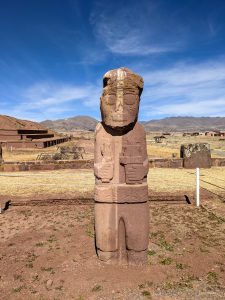 It was hard to return to the altiplano and the cold, especially during the freezing nights through which we had already suffered so much. When we saw in the morning that our tent was covered with ice, we knew why we were cold during the night. Fortunately, hotels in Bolivia are not very expensive and we started to allow ourselves the “luxury” of a nice warm bed.

After 2 days of cycling, we saw the city of La Paz and the Cordillera Real in the distance. We decided to save La Paz for last and cycle to Lake Titicaca first. A few kilometres before the lake is the archaeological site of Tiwanaku, the most important in Bolivia. The Tiwanaku lived during the European Middle Ages, before the Incas, and their empire was almost as important. Historians know very little about this culture and the reason for its decline. During the tour of the excavation site, we could see the remains of various temples, richly decorated stelae and the Gates of the Sun and Moon. We still don’t know much more about the Tiwanaku, but we were impressed by the idea of walking on the same stones as the priests of this civilisation 1500 years ago.

From Tiwanaku we went to Copacabana (on the shore of Lago Titicaca, not in Brazil 😉 ). The drive there was scenic. We drove along the lake to the Strait of Tiquina, which we crossed on lanchas (large ferries made entirely of wood). The way the wooden planks moved, we were afraid we would have to swim, but luckily we arrived dry on the other side. After spending the night in San Pedro de Tiquina, we continued our journey along the ridge of this peninsula, with the lake 200 m below us on both sides. As the end of the lake was not visible, we almost thought we were at the sea. Later in the morning, we dropped off our things at the Hostal Sonia in Copacabana and went to the harbour to catch a ferry to the Sun Island. According to some sources, the Inca culture was born on this island and the Inca princesses lived on the smaller Island of the Moon just opposite. We docked at the ruins of Pilko Kaina, an ancient Inca temple. From this monument we took a short 2 km hike over the ridge to the port of Yumani. We were alone up there and could really enjoy the 360° view, an unforgettable experience. We walked in the footsteps of the Incas on small stone paths and between terraces that were used to grow plants. After a coffee break at the port of Yumani, we returned to Copacabana. The next day we visited the city with its beautiful cathedral and associated chapels. To get some physical activity, we climbed the Cerro Calvario to enjoy the view of the city and the harbour. Then, unfortunately, it was already time to catch a bus to La Paz. It’s a shame that the time passed so quickly, but other adventures await us in La Paz!

To see all photos, please click here:
The northern altiplano