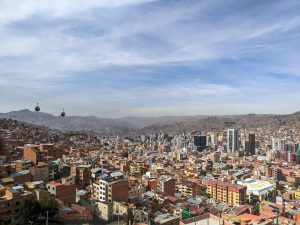 We saved La Paz for last so that we can catch a plane to Peru after our visit. But it didn’t really go as planned.

The plan was in any case that we would travel the Camino de la Muerte, the Death road, starting from La Paz. This mythical route is carved into a steep mountain side and leads from the Cordillera Real to Coroico, a small town at the entrance to the Amazon rainforest. For a long time, this very narrow road was the only connection from La Paz to the north-east of the country, so all trucks and buses had to travel it in both directions. It was not uncommon for a vehicle to fall off the cliff when crossing with another, hence the name of this road. An alternative and safer route has been built some years ago, and the Camino de la Muerte is now mainly an attraction for mountain bikers seeking thrills.

So we stayed only one night in La Paz before loading our bikes again and setting off. In the morning we started the difficult climb up the Cordillera Real. We had to ride several km across the city and zigzag between vehicles. Then, when we reached the heights of the mountain range, we finally started to breathe and enjoy the landscapes. On the La Cumbre mountain pass there was a small lake and a beautiful view of the snow-capped peaks. We devoured our picnic, then began the long descent east. The view of the valley once we left the mountain pass was breathtaking. The descent was very steep and soon we were frozen on our bikes. After 20 km and many metres of altitude later, we finally got a bit warmer again. The air was getting warmer and more humid, we could feel that the Amazon was approaching. There were still 10 km to go, then we arrived at the beginning of the Camino de la Muerte. We left the asphalt road and began the adventure.

At the beginning, we can’t see much, we are surrounded by fog. Only now and then was formed a hole in the clouds, giving us a view of the opposite mountain face or the valley below. 2 km further on, we come out of the layer of fog and see the curves of the Camino de la Muerte appear in front of us. The emptiness to our left is impressive, but the road is quite wide for bicycles. The landscape changes as we descend further and further, giving way to a jungle-like setting, still with the emptiness beside us. We come to a pretty little shelter and take a break. As it is already late, we decide to pitch our tent there, especially as some rain is planned for that night. On top of that we have a table and benches, finally we don’t have to sit on the ground like every evening.

We had a good night’s sleep and we are eager to continue the descent. But at 9am, when we are ready to leave, it starts to rain heavily. We wait a little to let the clouds pass, but 1h later it still hasn’t stopped. We take out our rain gear (the first time since we are back in South America) and we leave under the rain. Finally, the humid atmosphere offers a certain charm and the waterfalls are even more abundant. We got used to the rain, but after 6km of descent it’s the drama: A huge landslide has taken the road away, it seems that the whole side of the mountain is gone. We look to see if we can get through, but there’s a 4m depression with a torrent of mud at the bottom. On top of that, the rain has made everything very slippery. During 1 hour we try several paths, we see traces of other cyclists, but we have to face the facts: with the rain and the weight of our bikes it’s just too dangerous. We have only one possibility and that is to turn back. We feel like crying and we attack the uphill with frustration. At least the rain stops and we start to dry. After 7km, we meet other cyclists on the way down. One of the girls is French and we warn her about the landslide. They already know about it, it’s been there for a few months and their guide has brought a rope to get them through. And if the conditions of the day do not allow them to pass the hollow, they will call a colleague who will come and get them by minibus. In the end, it might have been better to make the journey with a travel agency. We continue the climb and we find ourselves faced with another problem: we have no more food. As we thought we would arrive easily in Coroico, we didn’t plan to eat. We pass a campsite, almost the only house on the road, and we are lucky, there is someone to welcome us. We ask if we can buy some bread as we still have some cheese left, but the woman even prepares us an asado with rice and salad, it’s perfect. They rarely have visitors here, so the woman who lives there with her 2 children and her mother takes the opportunity to chat with us and gives us a tour of the property after the meal. It’s nice, but we have to go on, otherwise we’ll never get to La Paz. We still have 2 hours of climbing to do and it’s almost 5pm when we arrive at the intersection with the new road. Now we just have to find a vehicle that will take us to La Paz. We hitchhike and it’s freezing, fortunately we don’t have to wait too long before a couple stops. They load our bikes and luggage on the roof of their car and we take a warm seat. They seem nice. They offer to help ourselves to the fruit in the trunk and finally they even take us to El Alto, where our Couchsurfing host for the night lives. But when it’s time to say goodbye, we don’t believe our ears when they ask us 100Bs for bringing us there. It’s not that much in Euro, but by bus it would have been much less and we think it’s not very nice not to warn us before. We are too tired to discuss, but we are really disappointed by their attitude. We eat a cena in a small bistro, then we go to Erick, our Couchsurfing host. With his kindness and generosity, he makes us forget the troubles of the day and we go to bed with a much more positive spirit.

The next day, we have a lot of things to take care of: booking plane tickets to Peru, doing an antigen test, organizing bike boxes for the trip, getting the new bike wheel for Matthieu that Decathlon sent us from France and, of course, visiting La Paz. In the morning we start with an antigen test at a nearby clinic and a trip to the airport to book the plane tickets and pick up some bike boxes. Unfortunately, we just come back with a negative test result, as there are no bike boxes at the airport and no possibility to buy the plane tickets. On the internet, the price of tickets from La Paz to Lima has risen to over 500 EUR, without luggage, the normal price being only 250 EUR. Talking with Erick and his girlfriend while eating lunch, we decide to take the next flight which is 4 days later. With the price difference, we can do a lot of things. In the afternoon, we go to the city centre to visit the Plaza Mayor and the witches’ market (if you want to buy a skeleton of a baby llama or other weird things, go there…). On the way, we pick up a bike box in a shop and Matthieu’s bike wheel. We finally start to be a bit organized for the next days, we just have to decide what we’re going to do the 4 days before our flight. Finally, we decide to go to a city we couldn’t visit by bike: Santa Cruz de la Sierra!

To see all photos, please click here:
La Paz and the Death road