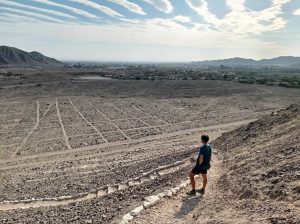 We love Nazca! It is hot and we can finally unpack the shorts we had hidden at the bottom of our bags. We had considered whether to continue through the mountains inland or follow the coast from Nazca to Lima. But in the end there is much more to see in Nazca than the famous lines, so we are very happy to have chosen this route.

The descent from the altiplano is so long that we have to split it over 2 days and sleep in the middle behind a small hill hidden from the road. The view is beautiful: in front of us is a huge plain: the mountains in front of us merge into large sand dunes which become desert further down. On the other side of the plain is another, much smaller mountain range, and behind it we can see the sea (or is it Katrin’s crazy imagination misinterpreting the blue horizon?). In any case, it’s great. The next morning we drive down the narrow switchbacks to Cerro Blanco, the highest sand dune in the world. It’s a challenge and as keen climbers we naturally want to climb it. The sand is quite hard and there are even some dry grasses and cacti growing there. It is easier to walk than we thought. When we reach the ridge, it gets more complicated. The wind has blown fine sand here and we sink in with every step. The view is impressive: on both sides of the ridge the sandy slopes drop far away. The ridge is long and we have to march along it for almost an hour. Finally we reach the summit at 2088 m and have another beautiful view of the plain. On the way down we amuse ourselves like children running in the sand. When we get to our bikes, our shoes and socks are full of sand. We finish the descent to Nasca and settle down in the first restaurant to watch the European Championship final. We are there in time for the second half. It’s time to rest and finally we leave the mountains behind for a few days!

We go on a day trip to the surroundings of Nasca. Even in the desert, the Incas have left their traces, but there are also ruins of people who lived before the Incas. We start with a visit to the Inca aqueducts in Cantalloc. The Incas dug underground pipes to supply water to the fields so they could grow fruit and vegetables even in this very dry area. Spiral wells were built every 50-100 m to maintain these pipes. This way they could reach them to remove stones or leaves that could block the pipe. It is impressive to imagine this architecture and the wells are beautiful to look at. We continue with two geoglyphs, Las Agujas and El Telar, images of needles and tiles, as if for weaving, as the names of the sites suggest. We see mostly lines and there is not much explanation, so we continue to the ruins of Los Paredones. Unlike the Inca sites we have seen on the Altiplano, the construction here is made of mud bricks and not stone. We also visit the aqueducts of Ocongalla. At this site the pipes are in the open and there is a retention basin. The site is surrounded by trees, it is a real oasis. Not far away, on the border between the desert and this oasis, we pitch our tent under some trees in the dry grass. It is a completely different world from the altiplano.

We have breakfast with the first rays of sunshine and it is already hot, we missed that! This morning we visit the ruins of Cahuachi in the desert. It is an archaeological site that is still active. Only a small part of the ruins has been discovered, but we can already see some clay pyramids. This site was built by the Nasca people who lived in this region around the year 0, so it is much older than the Inca sites we have visited so far. The guard is nice and explains a little about the site to us. They mainly used these temples for festivals to worship the Nazca lines, which are located in the plain just on the other side of the oasis. Cahuachi is a word from the Quechua language and means “I see” – from the temples they saw the Nasca lines, but also the sun, the moon, the mountains, the desert…. The Nasca kines are our next destination. There are many of them, and most can only be seen from the plane, but there are also some viewpoints along the national road to the north. We start with a small hill from where we see mostly straight lines running to the hill. On the side of this hill is the Cat, a figure that was only discovered in October 2020. A little further on is a watchtower. From the top we can see the figures of the two hands, the tree and the lizard. The clarity of the lines and the ease of recognising the figures are surprising. But the lizard is cut in half by the national road. We wonder how they could build a road in the middle of an archaeological site. We continue to the next village, a small oasis by a river. It is perfect for camping.

Today we discover more geoglyphs, but this time not on the ground, but on the mountainside. In fact, these lines come from the Paracas/Palpa culture, which lived about 100 years before the Nascas. This culture created the lines to be seen by everyone, even humans. So they drew them on the sides of the mountains. The Nasca created the lines to worship the gods, so they built them on the ground, visible only from the sky. The drawings also change: the Nasca mainly depicted animals, geometric shapes and lines. The Paracas/Palpa also designed people, for example healers, who were surrounded by sacred animals as if to tell a story. It’s very interesting to discover this universe, but if you stop literally every kilometre, you don’t get very far. The rest of the day we try to make up the lost time, but the strong wind blowing the sand in front of us complicates things. We sleep in the first hotel we find, fortunately the situation has calmed down the next day.

The next day, we continue our journey through the desert, interrupted by oases where we find small villages. In Ica, the regional capital, we make a small detour to Huacachina. It is a small lagoon surrounded by sand dunes. It is just a pity that the place is completely exploited by tourism: The lagoon is surrounded by restaurants and hotels, agencies offer car tours in the sand dunes and sandboarding. We cycle the last kilometres towards the sea. When we arrive in Paracas, we are very happy to see the ocean again. We take a walk on the beach at sunset and enjoy a Pisco Sour in one of the many bars.

Before we leave for Lima, we have one more thing to tick off our list: the Paracas National Park. We don’t do a boat trip to the Islas Ballestas to see sea lions and penguins, we already did that in Chile. But we do a bicycle tour to the land part of the reserve to see the beaches. Everywhere you look there is sand. There is no border between the beach and the desert. At the edge of the sea there are some beautiful cliffs, below the Mirador the waves crash against the rocks. Our favourite spot is the Playa Roja, a dark red sandy beach that contrasts beautifully with the blue of the sea and the yellow of the desert.

We still have 3 days to Lima, most of it on the motorway, so not very interesting. But one of the evenings we spend with Fredy, a very nice Warmshowers host. We spend the evening in his garden, where he has planted a lot of fruit and vegetables. We chat and taste the sweet wines of the region, we love this South American way of life!

To see all photos, please click here:
The treasures of the Nasca desert