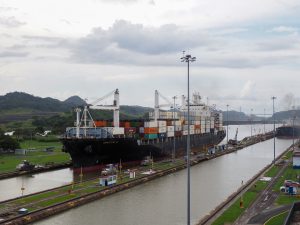 After disembarking in Puerto Lindo, we drive our first few kilometres along the Caribbean coast. We stop in Portobello to visit the ruins of the fortress where the Spanish stored the wealth of Peru before sending it by ship to Spain. We can still see the customs house and the cannons with which they defended themselves against pirates. In the afternoon we leave the Caribbean and head south towards Panama City. We sleep on the banks of the Río Chagres to visit the Miraflores Locks and the Panama Canal the next day. We are impressed by the size of the boats that pass through the locks with centimetre precision. We hope that the captains know what they are doing! On the observation platform of the locks, we also meet again our friends from the boat in the San Blas Islands. What a pleasure to exchange one last time while watching the boats loaded with containers. Then, we have only 10 km to go to the capital.

During a rest day (which wasn’t really a rest day in fact), we visit the Parque Metropolitano where we have the chance to meet some turtles in a pond and a bunch of coatis in the forest. What a joy to see these good climbers walking on the branches of the trees! In the afternoon, we visit the bay and the Casco Viejo, the historical centre. It’s nice, but we are surprised by the dilapidated state and the poverty in some streets. The next morning, we visit Panama Viejo, the ruins of the original city that was devastated by Henry Morgan and his pirates on the orders of the English. However, while visiting the very interesting museum, we learn that it was rather the Spanish who set fire to their own city when they saw the defeat approaching and were afraid that the English could settle in their city. For them, it was better to put the city in ashes and to rebuild it 8 km further, at the place of the current Casco Viejo of Panama City. After this very interesting visit, we leave the city by the famous Bridge of the Americas (by car unfortunately, because an overzealous policeman would not let us pass by bike, even pushing).

We head west towards the Costa Rican border. We ride for miles on the highway, and in the evening we almost always find nice places to put our tent, either by a river or on a beach. The landscape is not very interesting, it does not invite us to stop. Only the volcano Barú, the highest point in Panama, and the village Boquete at its feet attract us. We visit a coffee finca where Rich, the owner who came from the US 15 years ago for retirement, explains to us the whole world of coffee, from production to tasting and all the difficulties the coffee industry faces. The next day, we had planned a hike in the jungle, but the rain in the morning doesn’t really motivate us. No problem, we have already seen the jungle several times and Costa Rica is already waiting for us!

To see all photos, please click here:
The mainland of Panama