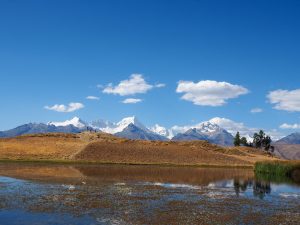 Leaving Lima, we drove along the coast for 2 days and then went up into the Andes and visited the Cordillera Blanca. Close to the coast, we visited the ruins of the Caral civilisation, the oldest ruins in South America (3800 BC). But the grey weather made us decide not to stay any longer and to get back up.

It was hard to go up from sea level to more than 4000m of altitude. In one day we climbed 3000m in 60km, a new record for us. After a good meal and a restful night, we could enjoy the view: We started with the Lago Conococha and continued with the Huayhuash massif. The descent was quiet with a dreamy panorama, if only every day could be like this! After a while, the Huayhuash gave way to the white mountain range. Next to us, the snowy peaks were all around us. We had to take a break to go up to the Laguna Wilkacocha and have a nice view on the whole white mountain range. At the end of the day, we joined Diana, Iván and their daughter Estefania, our perfect hosts for the next few days in Huaraz.

The first day we just visited the ruins of Wilkahuain, where we had a picnic with our hosts. It was a nice relaxing day. The next day we had some strength to hike again. We headed towards Laguna Churup and Laguna Churupita. The lake is nice, but there are similar places in the Alps. The hike was very nice though, with some easy climbing.

After these first experiences around this famous mountain range, we left Huaraz to advance to Caraz, the northern part of the Cordillera Blanca and the heart of the Huascaran National Park (Peru’s highest mountain, the Huascaran, is located here). We camped in the garden of Luis, our Warmshowers host. Our days were dedicated to other hikes. We started at Laguna Parón, which according to several sources is the prettiest lake in the national park. Indeed, the colour is magnificent, it’s hard to believe that this blue is natural. The next day we went up to Laguna 69, which competes closely with Laguna Parón in terms of beauty. It was a long way to get there, so we could only start the climb late in the day. The reward for this late start was that we found ourselves alone at the top. We were aware of how lucky we were and made the most of it. To camp, we went back down to the valley below to start the Santa Cruz Trek the next day. The trek starts from the village of Vaquería, on the other side of the mountain range. The start of the trek begins with a gentle slope through a beautiful, quiet valley, getting closer and closer to the glaciers. Passing the Punta Unión pass, we pass right in front of these majestic ice fields, offering an incredible view. On the other side of the pass, we could see a lake just below the glaciers and a larger one in the valley. Between the two, in a beautiful valley with a meadow and a river, we could already see the campsite for the night. All that remained was to descend before nightfall. The second day was quieter, just flat and downhill. The views were still impressive as we made our way through this valley, surrounded by white peaks over 6000m high. We walked along the lake we had seen the day before and then followed the Río Santa Cruz to exit the valley and return to civilisation. During the trek, we didn’t see anyone, just dogs, cows, horses and donkeys. We were alone with nature, a pure moment of happiness. Even if our feet and shoulders hurt after the efforts of the last few days (we are not used to carrying heavy backpacks 😉 ), we are refreshed before getting back on our bikes!

To see all photos, please click here:
The Cordillera Blanca