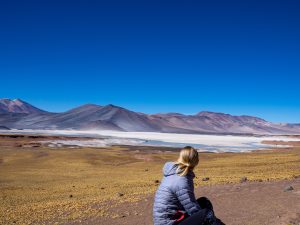 This city was certainly one of the highlights of our trip through the Americas. People who passed through there were telling us about the breathtaking scenery, but we still didn’t really know what to expect. The only thing we knew was that we wanted to see a lagoon with flamingos in front of the mountains (spoiler alert: mission accomplished).

On the first day, we discovered San Pedro de Atacama from high up in the Valle de la Luna (Valley of the Moon). As the name suggests, this is a spectacular valley of huge sand dunes and lunar geological formations. We were tired from the last few days on the bike, but we really enjoyed these last kms (partly also because it was downhill 😉 ). We saw these landscapes again when we went to see the Pukará de Quitor, a prehistoric village built in the rocks. Unfortunately, all the tourist sites were closed due to the Covid, but we were able to see the most interesting things from the outside, the human frescos on pillars at the entrance.

Our stay in San Pedro lasted almost a week as we had planned for us to rest and to think on the next steps of our trip. We took the time to stay in San Pedro for the first few days to explore the charming streets of the village on our daily walks. The streets are made of dirt and the houses are built of stones covered with earth. The village is well maintained and you feel like you are in another world, especially without the usual tourist crowds.

But the highlight were the two excursions we undertook to the altiplano, a plateau in the Andes at an altitude of over 4000 m. On the first day, our guide Patricio picked us up at 5am while it was still dark. We arrived at the altiplano and the El Tatio geyser field at dawn. We went to see the Barros geyser first and were fascinated by the bubbling water/mud and smoke coming out of it. It was worth getting up so early, as it is only at dawn, when the temperature difference between water and air is the greatest, that you can see the vapours in the air. While we were admiring the show, the sun rose behind the mountains and we went back to the bus to have breakfast and warm up with tea/coffee (it was about -10°C). Afterwards we went to the Blanco geyser, where water is breaking through a salt crust (therefore the name of the geyser). The water flowed down in a small valley and fed a river. We put on our swimming suits, but the water was so hot that we only managed to get in our legs. After the swim, we followed the river and the guide explained the fauna and flora of the area. We came across Vicuñas (a type of llama) and Vizcacha (a mix between a rabbit, a squirrel and a fox in yellow, or is that a descendant of the Yoda? 🤔). Then we started the descent of the altiplano, passing a deep blue lagoon with several birds (including flamingos!) and a breathtaking view from the top at the Puritama canyon. It was a day to remember!

The next day we took a bike ride (we had already missed them a bit) to the Guatín Canyon, an impressive valley with giant cacti. Following the stream a bit and climbing over some rocks, we found ourselves in front of a beautiful hidden waterfall (thanks to our guide Patricio’s insider tip).

To end our stay in San Pedro de Atacama, we returned to the altiplano with our guide Juan. This time we headed south to the Paso Sico, one of the borders between Chile and Argentina. We passed by the Salar de Atacama, the largest salt desert in Chile. The first stop was at the Tropic of Capricorn which passes through here and where there is also an entrance to the Inca Trail. Juan explained its significance and the history of the Incas before taking us to the village of Socaire, one of the indigenous villages in the area. A little further on, we stopped in a quebrada (a canyon) to have breakfast (with good French bread!) and then continued our climb up the altiplano to the Laguna Aguas Calientes. The view on the lagoon and the volcanoes behind was magnificent and we met all the typical animals of the altiplano (vicuñas, zorros, nandus, vizcachas). Just before the border we stopped at the piedras rojas, some stone formations that appear out of nowhere from the earth. Then it was already time to return to the town, but on the way we stopped at the Tuyacto Lagoon, another natural gem. We came back to San Pedro with hundreds of pictures, but for sure, pictures and stories from other travellers can never replace the wonderful landscapes we saw!