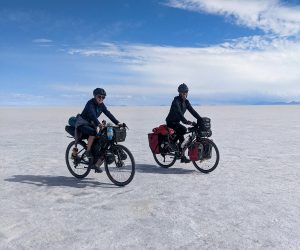 We dreamed a lot about the Salar of Uyuni, and even though we have seen hundreds of pictures, we can’t believe that we are really there! We are impressed by the huge white expanse that seems to touch the sky on the horizon. But the deeper we cycle into the salar, the harder it is mentally. We pedal hard, but we have the feeling that we are not moving forward, as the white landscape remains the same. In the evening, as soon as we pass the 70km mark (our goal for the day), we set up the tent at the same place where we are. The next day we continue our crossing of the salar. In the morning, we aim for Incahuasi Island (”land of the Incas” in Quechua), a mass of land that pierces the salar and is inhabited only by giant cacti. We climb a little bit on the rocks and the name “island” takes on a new meaning in our eyes. The salar surrounds the island like an ocean, with a little imagination we can even see waves.
In fact, in the salar, everything is a matter of imagination. All proportions seem to be in question. It becomes difficult to tell if something is big or small, near or far. Feel free to visit our gallery to see our interpretations of proportions in the salar 😉

After Incahuasi Island, we aim for the north and the Tunupa volcano. The summit is more than 5000m high, it is our project for the next day to climb the summit. We settle down at the hostal Maya for the night, then we attack the climb the next morning in new freshness. We pass by a cave with mummies (unfortunately closed, but we can see a piece of skeleton by looking through a space above the door), then the climb is almost in straight line towards the crater of the volcano. The higher we go, the harder it becomes and we feel the lack of oxygen in the air. Especially the last 2km are difficult. We have to climb straight up on lose rocks. We really wonder what we are doing here. But when we reach the top, the pride and the beauty of the landscape reward all our efforts. Behind us, we see the immensity of the salar, in front of us the impressive crater and its rocky peaks on the other side.

The descent is not much easier. Back at the hotel, we collapse on the bed. On top of that, Matthieu, who loves racing, has signed up for the 28km Tunupa Skyrace the next day. He has to get up early to get the starting number (in vain, as the bus with the organiser and the majority of the participants arrived 5 hours late) to run 10km on the surrounding hills and 18km across the salar. The race is difficult, and the poor organisation of the race is discouraging with no signposts on the salar. But Katrin, who plays paparazzi in the salar, encourages him on the last 5km to the village. We celebrate Matthieu’s arrival with a good meal and an afternoon of rest. The next day we leave the salar and its surroundings and head east towards the central valleys of Bolivia.

To see all photos, click here:
Salar de Uyuni and the volcano Tunupa