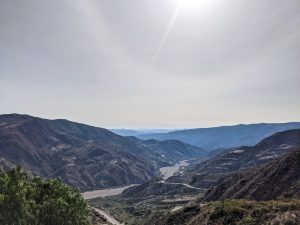 We climbed a lot of mountains in the central valleys of Bolivia. The narrow valleys followed one another and offered us beautiful views, long descents but also steep and difficult climbs. The towns we passed through show a lot of traces of the colonial history and each town has its own story to tell.

Starting with Potosí, a city we had never heard of before but which was the economic centre of the world in the 18th century. Potosí was built around the Cerro Rico, a mountain rich with silver and tin, where the Spanish colonizers mined all the silver for their currency. The silver was melted into coins and stamped with the Spanish initials at the Casa de la Moneda before being delivered to Spain in large vaults. What remains today of this glorious era are the Cerro Rico mines (still in operation) and the museum in the Casa de la Moneda. We visited both, and to see the young workers in the mines (their life expectancy is only 35 years) and their beliefs was a striking experience. They earn more than many Europeans and buy beautiful and prestigious cars. But their ancestral beliefs and offerings to the Tío, the god worshipped to protect them and to provide them with the riches of the mine, form a surprising contrast with the lifestyle outside the mine. One thing is for sure, we do not envy them for their working conditions!

In Sucre, the constitutional capital of Bolivia, which now holds only the power of justice after the seat of government has been moved to La Paz, we find plenty of colonial style buildings. They are all white, therefore the city is also known as ciudad blanca. We loved the little courtyards that are very inviting to have a snack, and this also became our main activity in the city: wandering through the streets and tasting a lot of different meals, especially the Chorizo chuquisaqueño, the typical Sucre dish.

After Sucre, we headed to Cochabamba. We crossed some lower valleys and finally found some warmth again. It was great to put away the down jacket for a few days and not to freeze as soon as the sun went down. Moreover, as we approached Cochabamba, we encountered more vegetation, a clear sign that the Amazon forest was not far away. Cochabamba is a younger city, there were hardly any traces of its colonial past except in the central square which is surrounded by beautiful buildings with arcades and the cathedral. We continued our gastronomic discovery of the country here with the Pique Macho, a convivial dish to share, mainly composed of chips and different kinds of meat put on top. To digest everything, we climbed a small mountain with a huge statue of Christ that overlooks the city (a bit like in Rio de Janeiro). The view over the city and the valley was breathtaking, but on the way down we nearly got stuck between the cacti. We escaped with quite a few scratches, and it was with memories of the sweetness of life, the abundance of plants and food that we returned to the cold and austere altiplano.

To see all photos, click here:
Potosí, Sucre, Cochabamba and the central valleys