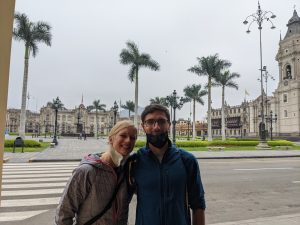 To be honest, Lima was a bit of a disappointment. It was grey every day, many of the museums we wanted to see were closed because of Covid and in general we were a bit lazy to do things. Fortunately, the main idea of our stay in the Peruvian capital was to rest. The people we met were very friendly, which compensated us a little bit for all the grey around it.

Starting with Fernando, our host for the first 2 nights. We were welcomed with a warm bed and a good meal. We talked a lot and Fernando guided us through Callao, the northern suburbs of Lima, to La Punta, a stretch of land in the ocean in the north of Lima. In Callao, we also passed by the Fortaleza Real Felipe, a fortress built by the Spanish to protect themselves from pirates, and the port of Callao, a huge transit centre with lots of containers arriving and departing from all over the world. Thanks to Fernando, we also met Walter, our Airbnb host for the first week in Lima. He welcomed us with beers and biscuits on the terrace of the flat. And in the flat, a bottle of wine and a bag of good Peruvian coffee were waiting for us as a gift. He also set up a desk especially for Matthieu so that he could work properly. Meanwhile, Katrin enjoyed the hammock on the terrace. We had a great time in this flat.

In the second week, we took an Airbnb flat in the Miraflores district, one of the richest and best located areas of Lima. Here we took advantage of the proximity to the Lugar de la Memoria, a museum about the period of terror in Peru (first by the terrorist organisations Sendero Luminoso and Movimiento Revolucinario Tupac Amaru, and then by the dictatorship and the military who were able to establish themselves thanks to the disorder in the country until the year 2000). In Miraflores, we also visited the Huaca Pucllana, a pyramid in the centre of Lima, dating from around 400 A.C. It was built by the Lima culture (which gave the city of today its name) with lots of small handmade bricks, like books that are placed on a shelf. We also visited the ruins of Pachacamac, 30 km south of the city. It was one of the most important cultural centres in the region built by the Lima culture, but was also used by the Wari, Ychsma and Inca. Today, much of it unfortunately remains buried under the sand and it takes a bit of imagination to see the site.

In Miraflores, we also met Mariela, an Erasmus friend of Matthieu from Granada. They hadn’t seen each other for 6 years. She gave us a taste of Barbarian craft beers and there was a lot of chatting to catch up on the time since the Erasmus year. The day before we left Lima, we met Julio who is a friend of Tatiana, a friend of Matthieu’s in Brussels, Belgium, who lived in Lima some years ago. Julio guided us through the centre of Lima, to the Plaza San Martín, the San Pedro church, the Plaza de Armas, the pedestrian streets, the national theatre, etc. On a previous visit to the centre, we had just been to the San Francisco convent to see the catacombs. When we got back on the bikes, we were pleasantly surprised to see dance groups in typical dress performing in the Justice Square. But the highlight of the day was the gastronomic brunch we had at Astrid and Gastón, one of the best restaurants in Lima (and in the 50 best in the world). All the dishes were excellent and we were treated to a lot of different flavours. So, we leave Lima and the grey weather, happy to find the sun further north, but also happy with the people we met and the experiences we had!