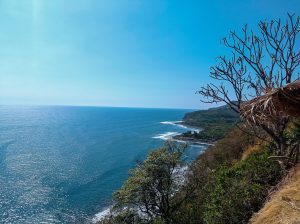 The passage through both countries was very fast and mainly on the main roads.

In Honduras we only spent one night. As we entered the country we were shocked by the amount of rubbish on the roadside. After a year in Latin America, we are already used to seeing rubbish on the roadside, but here it is still a step above. It also announces the poverty in the country which is more present than in Costa Rica and Panama for example. While crossing the first Honduran city, we are also surprised to see guards with shotguns in front of many shops, banks and car parks. Nevertheless, we find a nice camping spot in a rather dry forest where Kati even sees a deer and where we see the sky turning to a whole palette of red and orange colours.

The next day we shortly see the sea with big container ships and a vaccination campaign in the main square of Nacaome in the shade of some trees, and then we arrive already in El Salvador. It is the smallest country in Central America, in 3.5 days we cross the whole length of it. Our experience is marked by nice encounters and Pupusas, flat bread filled with various ingredients, but almost always with cheese.

After our first day in El Salvador, we think of camping by a river at the entrance to a small town, but as we leave the supermarket, a man suggests we take a shower at his house, right next to the supermarket, and then finally pitch the tent in his garden. It’s his holiday home, he lives in the United States in the state of Virginia where he has a restaurant with Salvadoran food. We talk a bit about our trip, about the United States, and then he makes us try some Salvadoran aguardiente, a sugar cane-based hooch. We soon realise that many Salvadorans live in the US or know people who do. Several people offer to speak to us in English or tell us that they are here to spend the holidays with their families, like a man we meet at the beach who comes to talk to us because he is attracted by our bikes. But the most memorable encounter is certainly with Valerie and Denis, a French-Canadian couple who hosted us via the Warmshowers network for New Year’s Eve. Valerie’s rancho is located directly on the sea, in a small village. We take the opportunity to relax, chat in French, eat and drink well, play cards with the neighbour’s daughters, see how the children burst the piñata for the birthday of one of the neighbour’s daughters and get some sweets… In short, it’s a very nice paranthesis in this trip and especially at the time of the end of the year celebrations, it makes us feel less alone. After this moment of relaxation, we have enough strength again to go to the very mountainous Guatemala!