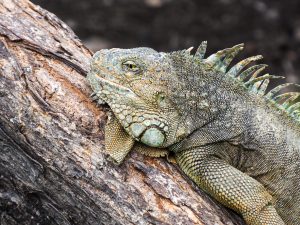 We are finally in Ecuador! As we get off the plane, pass through immigration control without any problems and step out of the airport into the hot air, we can hardly believe it. We can leave our worries about the border behind and concentrate on the essentials of the trip again: Cycling and discovering beautiful landscapes! But first we have to reassemble the bikes. We privatise the space on the pavement in front of the airport next to a pond with goldfish. 2 hours later, as night has already fallen, we are done and everything is working, what a relief! After a quick (and not very healthy) meal at the airport, we get onto our bikes and ride into downtown Guayaquil. People honk much less, the city seems clean, we already have the feeling that we are going to love this country!

On the first day we take the time to visit Guayaquil. After a good seafood meal (crabs and shrimps are farmed in the region), we start with Parque Seminario, where iguanas move around freely. The animals look quite well-fed and sluggish. Therefore, we dare to observe them up close and even touch their hard scaly skin. Afterwards, we drive to the Guayas riverbank, where there is a very touristy promenade. On offer are boat trips, restaurants, a cinema, children’s games, a small zoo and rides on a Ferris wheel, in short everything Guayaquileños might want to do on a Sunday afternoon. We are not interested in all this fuss and look out over the river with large islands in the middle. At the end of the promenade, we climb the Cerro Ana hill. We climb 444 steps between small colourful houses to a small esplanade with a lighthouse and a chapel. Finally the sun comes out and we have a beautiful view of the city and the river below. We go back down and take a short bike ride around the Estero Salado, an arm of the river that stretches from the sea to the centre of the city. Tired, we return to the hotel and prepare to leave the next day.

Before leaving Guayaquil, we take a bike tour to Isla Santay, the largest island in the Guayas River. A long pedestrian and bicycle bridge leads across the river to the island. Once on the island, we continue on small, elevated wooden paths. We ride to the Ecoaldea, the small village of the indigenous people who still inhabit and care for the island. A mangrove forest spreads out around us, adorned by some beautiful tall palm trees. In the village we park our bikes in the bike park and visit the two crocodile enclosures 500 m further along the boardwalk. We see about 10 crocodiles, rather lazily either at the edge of a small lagoon or well camouflaged in the water between the algae. But 2 of the crocodiles come out of the water with threatening noises, we are quite happy to be on the elevated paths and out of reach. We walk through the village where all the houses are elevated to protect themselves from the rising waters during the rainy season. In front of each house, a small footbridge leads to the main jetty. Before returning to the mainland, we take a nice walk through the forest to some of the streams that flow across the island. We see some small crayfish, but the most present animals are the mosquitoes that follow us at every turn. Fortunately, they can’t catch up with us on the bike.

Around Guayaquil, the landscape is flat. So we make fast progress, but unfortunately so do the trucks. After 60km, which are not very interesting (apart from some chocolate factories and cocoa fields), we look for a place to camp, but it looks rather complicated until 2 young people on a motorbike stop and invite us into their house. We get to know Ecuadorian hospitality for the first time: They put us up in a nice room, let us take a shower, serve us a good dinner and an excellent breakfast, and put incense sticks in the room before going to bed so that the mosquitoes don’t bother us during the night. And the next day, the two young people on the motorbike lead us between palm trees and rice fields on the shortest way to the main road. We don’t know how to thank them!

A few kilometres further on, a small gravel road leads to the Manglares de Churute nature reserve. There are several small hiking trails, but we chose the one where monkeys can be seen. As we approach the densely forested hill, we can already hear the howler monkeys. It’s almost a bit scary, but we are still excited. But as we enter the forest, everything is quiet, except for the clouds of mosquitoes buzzing around us. After a while we come across a squirrel with a nut, then a raccoon that runs away as soon as it sees us. But still no monkeys. When we arrive at the end of the trail at a small, rather uninteresting waterfall, we are a little disappointed. We turn back, but after a few hundred metres we stop. Behind us, where we were just a moment ago, we hear the howler monkeys. They seem to be making fun of us. They have been watching us and thought they would have their peace again now that we are gone. We walk a few steps in their direction until we reach a spot where we can clearly see the treetops around us. We are silent, then we see movement and a tail moving between the branches. A little later we see several monkeys passing from one tree to another, then it is silent again. We keep a lookout for branches moving, but everything is still. It looks like they have gone. We return to the bikes and are happy to have seen monkeys in a forest in full freedom. We return to the main road and soon turn towards the Andes. Here on the coast we have seen everything we wanted to see and we have really enjoyed these new experiences and landscapes!

To see all photos, please click here:
Guayaquil and the mangrove forests