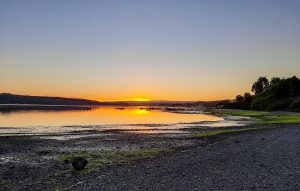 We spent a week on the island of Chiloé, and the detour was definitely worth it! After a week in the rain and the cold we disembarked in summer after only 5 hours on the ferry.

Castro and the east coast

The route of the ferry was great: we crossed several bays between many small islands and passed several oyster farms. But the highlight were the sealions sunbathing on the oyster farms and one of them doing his diving exercises right next to the ferry. Our joy continued when we disembarked in Castro, the capital and largest city of the island. We were enchanted by the colourful stilt houses, the crafts market, the lively main square and the colourful wooden church. We stayed the whole afternoon and met a couple of Swiss cyclists with their little daughter. In the evening we found a small, quiet beach just outside the city to pitch our tent. We had a view on some stilt houses and the bay, which turned pink at sunset. We enjoyed this first night on the beach very much and it was clear that many more would follow.

The next day Katrin finally bought a new phone (the old one didn’t survive the rain of the Carretera Austral) and we set off for Dalcahue. We thought that the drive along the coast would be relatively flat, but that was a huge mistake: Even though there is no remarkable mountain range on the island, all roads go up and down all the time. Thus, we landed completely exhausted at a beach where we admired the next sunset. When we continued our way the next day, a sign with a waterfall caught our attention. Why don’t we have a look at it? A very steep descent further down, a 1000 CLP entry was required (a little more than 1€). It is not a lot of money, and we didn’t want to have made the descent and especially the way back up for nothing. After walking along a small path, we arrived in another world. The vegetation suddenly became lush and at the end of a clearing we saw a waterfall which plunged over several dozens of meters into a lagoon. Have we already arrived in the tropics?

After the picnic we continued our way towards Quemchi. It was already December 31st and so we hoped to find a festive atmosphere in the city. But when we arrived, we were quite disappointed: Quemchi is very small and everything seemed to be closed. A man approached Matthieu on the street and asked if we were looking for a room for the night. After a short conversation we followed him to his shared apartment behind a hairdresser’s shop. Matthieu took the opportunity to get his hair cut and to dress up for the New Year’s Eve. But even in this shared appartment of 5 people no party was planned. Everyone went to a different party and we were alone in the house most of the evening. At least we cooked ourselves a good meal with chicken and fried potatoes. We fought our tiredness so that we wouldn’t fall asleep before midnight and at least we could watch the fireworks from the beach. So shortly before midnight we went out on the street, but we didn’t meet a single living soul. When the church bell rang at midnight, not a single fire lit up the sky. The only festive mood came from the boats in the bay honking very loudly. A little disappointed we went back to our room and only 5 minutes later we were in bed.

The new year continued sunny and we drove further north along the coast. We wanted to see another waterfall, but after a 15-minute walk through the forest we came to a clearing where only a small trickle fell from the top of the rocks. This waterfall was almost dried, luckily the walk in the forest was nice and we did not stop for nothing. After a picnic on the beach we decided to cross the island to see also the west coast.

After countless ups and downs between fields and forests we arrived in Chepu. Since it was already late, we pitched our tent on the riverbank. The next day we drove the last remaining kilometers to the coast to see the sand dunes. The cows guided us through the dunes, they seemed to know the way. At the top of one of the dunes we finally saw the sea and were impressed by the size of the beach. We would have liked to stay longer and walk to the sea, but since the morning we had huge, stinging flies (about 2 cm big) around us, which staied on our tracks all the time. So we preferred to get back on our bikes, hoping that we would ride faster than these beasts could fly.

Around noon we arrived at the beach of Puñihuil, where there are rocky islands with penguins. There were many boats that tried to persuade us to go for a ride, but at the moment we only had eyes for the restaurant, we were starving. We treated ourselves to fresh fish and a glass of wine on the shady terrace while we watched the tourists getting on the boats. All this was too touristy for us, so we decided to continue our trip, although it was probably the last chance to see penguins for us. Instead we came to a huge beach where we were almost completely alone. We watched the shells and their inhabitants (yes, inside there were little clamps and legs that moved, we don’t know exactly what it was) that the Pacific Ocean had washed onto the beach. When we arrived on the north side of the island we visited the Museo Puente Quilo, which told the story of the island and its inhabitants. It was a kind of fantastic cabinet where they exhibited everything from an old typewriter to old coins and stuffed animals (turtles, big fish, puma, …). We drove further along the north coast to Ancud, where we camped on the beach for the last time. The next day we drove back to the mainland, towards Puerto Montt.

To see the photos: