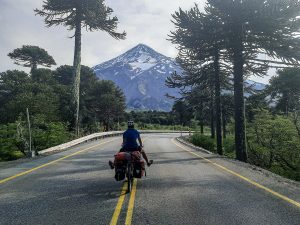 After a well-deserved rest day in Puerto Montt, where we only ate hamburgers in front of Netflix, we headed for the first lake, Lago Llanquihue. Unfortunately the bad weather was back. When we arrived at the lakeshore in Puerto Varas, we should have seen the Osorno volcano in the background on the other side of the lake. Instead, we had to seek refuge from the rain under a roof on the Plaza de Armas and let the threatening clouds pass by. After the last drop of rain we rode along the lake shore on a beautiful cycle path towards the east to get closer to the Andes again and to see the volcanoes. We made good progress on the cycle path. But even when we arrived at the foot of the volcano Osorno, we still couldn’t see it. He had been hiding in the clouds all day, the only proof of his presence was the black sand on the beach where we pitched our tent for the night. Fortunately, the lake shore and the Vicente Pérez Rosales National Park, which we crossed, rewarded us for our efforts. We took a short walk in the national park to Laguna Verde, and the sun, which broke through clouds in the middle of the lake, offered us a wonderful sunset on the beach.

The next day we woke up under a grey sky again, so we sadly left the Osorno behind us without having seen it. But it was only the first volcano, many more were still on our route. After we followed Lago Llanquihue to the north coast in the morning, we reached Lago Rupanco in the afternoon and Lago Puyehue at the end of the day. The sky gradually darkened, but luckily the rain waited until we reached a protected viewpoint. We hardly had time to get off our bikes when the first raindrops started to fall.

This is a great day to conquer a mountain! We would have liked to tell this ourselves when we woke up, but unfortunately it was not true. The rain and the sun came off in the sky, but it was the rain that was most present. We consoled ourselves by telling ourselves that at least it wasn’t too hot when going uphill, because our way led us to the other side of the Andes. After a few kilometers of smooth uphill we stopped at the Puyehue National Park to see some waterfalls. The short hike seemed like a path through the Amazonian forest (at least, as we imagine the rainforest), we really enjoyed it! Then we had a few more kilometers on the bike before we left Chile. After the Chilean border post the hard part of the day began: 40 km until the Argentinean border post and the Paso Cardenal Samoré half way. And there were 1000 altitude meters more on the speedometer!

At the pass we reached the geographical border between Chile and Argentina and left the Puyehue National Park to enter the Nahuel Huapi Park. The most difficult part was done, we only had to go down the pass to Villa La Angostura, where we were already expected by our host. Unfortunately we can’t describe the view, it rained again, but according to Google the view should have been nice… And unfortunately the rain did not leave us for 2 whole days.

The first day we were tired, so we decided to just do nothing. Furthermore, our host (a professional cook) spoiled us in the afternoon with Facturas (small pastries) and in the evening with a good typical dish of the region (a kind of stew with meat and vegetables, which was well suited to the weather). On the second day we had to get out of this cocoon despite the rain. After a short visit of Villa La Angostura we started on the road of the 7 lakes, which connects San Carlos de Bariloche (a little south of Villa La Angostura, we decided not to make the detour, because we couldn’t see anything anyway while it was raining) with San Martin de los Andes, passing 7 lakes and a lot of mountains. We saw the lakes under grey clouds, but unfortunately not the mountains. At the end of the afternoon we passed a big restaurant/hotel. We were soaked to the bone, the only thing we wanted was to warm up. But unfortunately the hotel was full, but we enjoyed a hot chocolate and lemon cake. For drying we stood in front of the oven and turned around every 30 seconds, a bit like a chicken on it’s spit. During this task a young girl came to introduce herself (the hotel was full of young people, we thought it must be a school trip or a club outing). We started to talk and in the end she wanted to explain to us how much God loves us all. For a moment it was interesting to discuss religion with her, but after 30 minutes we apologized, we had to cycle a few more kilometers to the next campground and pitch our tent before the sun went down.

The next day the sun was finally shining as we crawled out of our tent, maybe God really loves us (or the weather fairy had pity on us). We finally saw the mountains surrounding us and we were totally impressed. What a beautiful environment! We left with new energy and followed the remaining lakes to San Martin de los Andes. We only stopped at Lago Falkner for a few photos and a food truck to have a small burger for lunch. In San Martin the Camino de los 7 Lagos ends, but there were other lakes to discover. So after some shopping we went to Lago Lolog, a bit above San Martin. This last climb at the end of the day made us completely exhausted. We settled down at the lake and drank a beer at sunset.

We continued on the road above Lago Lolog, and after a small pass we finally saw our first volcano in the distance. The top of the volcano Lanin towered above the other peaks. We drove on to Junin de los Andes, and with every kilometer the country became drier and drier. We were impressed by this change, how can one get from such a green environment to a more desert-like landscape, in a distance of only 50 km? We were not yet used to this drought and the associated heat. In Junin de los Andes we stopped for lunch, but finally we stayed almost the whole afternoon to enjoy the refreshing shade. At the end of the day we finally motivated ourselves to continue our trip, as the planned camping site was located at the edge of the Rio Malleo. There were only 10 km left when Matthieu had a flat tire… So close to the finish, but we had no choice, so we took off all the bags and changed the tube. While we put the tire back on, air came out again. When we took a closer look this time, we noticed that the rim bed had shifted in some places and that the tube was jammed in some openings. Nevertheless we used a new tube and thought we could still manage the last kilometers, especially since the sun was already setting. But in the end the tyre was flat again 3 km before our arrival. This time it was too late, we didn’t want to stop again, so we carried everything to the river. After setting up the tent and eating in the dark, we crawled into our sleeping bags.

In the morning we improvised a bicycle repair shop on a piece of grass by the river. Admittedly, the place could not have been nicer. In the beginning we wanted to continue our trip in Argentina and return to Chile via unpaved roads and a small border. But since we weren’t sure how long the tape we had put on to protect the tube would last, we preferred to go to the next big city with a bicycle shop. In the early afternoon we set off for Pucon in Chile. We cycled towards the volcano Lanin, at the foot of which the border crossing should be located. On this good asphalt road without much traffic we had the impression to almost fly, so fast we made progress. The volcano grew before our eyes, but our progress was stopped abruptly at the entrance of the Lanin National Park. The road turned into a track of volcanic sand on which our bikes sank in again and again. After very problematic 10 km we were back in Chile.

Chile welcomed us with a fantastic view of the volcano, the Lago Quillelhue and finally with a nice descent into the valley. Only at the end of the valley we stopped at a small restaurant at the roadside in Rucañanco. For a reasonable price we were very well served. We got a first impression of a not so expensive Chile. On the parking lot we found a small piece of grass where we pitched the tent for the night (it is true that it was the least glamorous campground so far, but we slept well anyway).

In the morning we were allowed to use the toilets of the restaurant and refill our water supplies. In the end it was so cheap and good that we had a pan of scrambled eggs and fresh bread before leaving. We took a last photo of the volcano Lanin, which was still visible before we started again and disappeared around the next bend. We drove through one village after the other before we saw the volcano Villarrica in the distance. A small photo to remember, what we did well, because a few minutes later the volcano had already disappeared in the clouds. Arrived in Pucon we had lunch and talked a little with our cyclist friend Guillaume, who happened to be in a hostel not far from our picnic bench.

In Pucon there are many restaurants and bars, and in the harbour of Lago Villarrica there were many boats. The town was therefore very touristy. Since this is not what we like most, we didn’t want to wait here for one of the bicycle shops to open (most shops in Chile are closed between 1 and 3 pm). So we preferred to ride along the shore of the lake to Villarrica. Here there were finally open bicycle shops to solve all our little problems (or almost). We stayed one night in Villarrica with a young couple who gave us a private concert with their friends (the woman and her friends were professional singers). The next day we continued our journey towards the Chilean coast.

To see the photos:

Between lakes and volcanoes