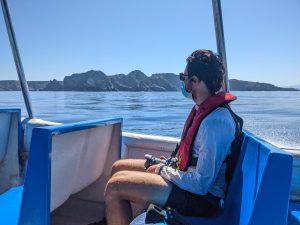 We made good progress these last days, but we were also often in the tourist mode.

We started in the Elqui valley, where we could taste a more rustic cuisine (goat meat for Matthieu and pork ribs for Katrin) and especially the famous Pisco. Pisco is a wine-based distilled drink and both Peru and Chile claim its origin. We visited the oldest distillery in Chile, the Pisquería Fundo los Nichos, in Pisco Elqui (Yes, the village is named after the drink – unless it’s the other way around? 🤔). The visit was very interesting with funny little details, like the skeletons in allusion to the founder’s friends who often had a drink or two too many. The Pisco tasting ended the visit. We were treated to two small glasses, one at 35°, the other at 40°. The Pisco was good, but we preferred the licorice wine that we could taste as a bonus (the base of the Pisco, before distillation). With the heat, we could feel the alcohol immediatly and our legs became quite heavy. Fortunately we only had to go downhill before we could lie down on our mattresses.

The next evening, we had an appointment with Eric, a French astronomer, at the Pangue observatory. We were finally going to be able to better understand this beautiful night sky in the southern hemisphere. We were impatient, as other travellers had given us good feedback about this astronomical tour (thanks @Maxifeliconcarne for the contact) and we were not disappointed. Progressively, Eric and his colleague Massimo showed us star after star through the telescope, nebulae (“star factories” = gaseous clouds where stars are formed), star clusters (thousands of stars in a small space) and even our neighbouring galaxies. They patiently answered all our questions as in a “astronomy for beginners” class (now we feel a little less ignorant 😉 ).

After this beautiful experience, we went back to the coast (we already missed the beach) to visit the Pingüino de Humboldt nature reserve. The reserve is composed of 4 islands in front of the Chilean coast that are inhabited by penguins (who would have guessed 😆), sea lions and different types of birds. And in the water it is possible to meet marine mammals like whales, dolphins and sometimes even orcas. It was not easy to find a boat, everything seemed to be closed. On the one hand, it was already out of season, on the other hand, there was almost no tourism because of the pandemic, and on top of that it was Easter Sunday (we agree, we could have chosen a better time for a visit). But in Caleta Chañaral de Aceituno, we were lucky. We were able to board a boat the next morning with only one other family with two small children (the boat is made for 25 people). The guide began by dampening our expectations by warning us that it was out of season and that he could not guarantee that we would see much (not a good start, but we knew that beforehand). We approached the island at high speed, craning our necks to see the flipper of an animal. It was on the other side of the island that a pod of dolphins appeared right next to our boat. We were as excited as the kids who were with us on the boat. We stayed for quite a while, just our boat and the dolphins so close that we could almost touch them. The guide gave us a lot of information about their way of life. After half an hour, we continued our tour of the island, seeing several types of birds, when the guide called out: Look, a penguin! Indeed, there was a little penguin all alone among the cacti. Yes, next to the cacti. We never thought we’d see both at the same time either! Katrin was all excited, since she wanted to see penguins and she already annoyed Matthieu about it for the whole journey. 😂 We finished the tour around the island by finding more penguins on the rocks. At last, we came to a cove and couldn’t believe our eyes. The whole cove was full of sea lions. There must have been several hundreds if not thousands of them, and it was an incredible uproar. They were shouting in all directions, throwing each other into the sea (at least to us, it didn’t look like they were jumping voluntarily in the cold water) and in the middle of it all, there were lots of baby sea lions. They were so cute to look at that we were sad to leave them and go back on the firm land. With lots of good memories in mind, we continued our journey north to the Atacama region and the desert.

On the sanitary side, we crossed a few municipalities in quarantine, but we didn’t really have any problems to pass the controls. Generally, we argue a while with the gendarmes/military, they don’t really know what to do with us, they call us gypsies (that’s apparently the box we fit in best 😂 ), and finally they let us through. Keep your fingers crossed for us so we can keep it like this!

To see all photos, click here:
As tourists in the Coquimbo region