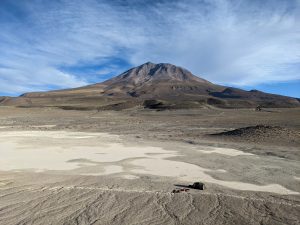 In San Pedro de Atacama we arrived in the north of Chile and had to think about how to continue our journey. Last year, it would have taken us no more than 2 minutes to think about the border crossing. We would have simply taken the route we liked best. In the current context of the pandemic, it was a bit more complicated than that.

We were lucky that Bolivia currently allows foreigners to enter with a 72h PCR test and a 10-day quarantine, which was our basic plan (to enter Bolivia after San Pedro de Atacama). The problem was that Chile has completely closed the borders since the beginning of April. There is an exception that says you can leave the country if you don’t come back, but the corresponding form from the Chilean authorities can only be filled out by Chileans or foreigners with a permanent residence in Chile. During our stay in San Pedro de Atacama we wrote about ten emails and made several phone calls to get more information about our particular case. But the information we got was very contradictory: “The borders are totally closed, you can’t leave the country at the moment”, “There is nobody at the land border, you can only leave by plane through Santiago airport”, “You can just go to the border, there will always be someone there anyway and in your case it should be fine.” It’s easy to say that we didn’t know which version to believe, so we decided to just take the risk and try it. Since we were already in the area, we would lose 1-2 days at most.

Now we had to decide which border we would take. The Hito Cajón border, 50km from San Pedro de Atacama, was our first choice, because on the Bolivian side the road leads across the Altiplano, past some very beautiful lagoons and volcanoes that reach up to 6000m. The problem was that this border is for tourism only (no commercial traffic, the only border crossings currently allowed in Chile), so it might actually be closed for the time being. There is also no town on the Bolivian side for about 400 km, where we could pass the  obligatory quarantine. The other solution was to cross the border at Ollagüe, about 300 km north of San Pedro de Atacama, where we would only have 200 km to Uyuni to do the quarantine. The problem here was to make the 300 km to the border within 72 hours before our PCR test was no longer valid. Without a bus, we had to rely on cars or trucks to take us there.

On Sunday morning, we should have received the result of our PCR test to be able to upload it online to cross the Bolivian border, but we had nothing in the mailbox. At the exit of San Pedro de Atacama we were lucky. After only half an hour, Diego, a young worker from one of the nearby construction sites, stopped to take us to Calama, 100 km away. We already knew this road, it was the one we took to get here, so we could concentrate on having a nice chat with Diego. When we arrived in Calama, we ate our sandwiches and checked the results of the PCR test again (still nothing). We even went to the clinic where they did the tests, but the only answer we got was to wait until they contact us. In the early afternoon we had to continue on the road or we would never reach the border. We positioned ourselves at the exit of Calama, but no vehicle stopped. We decided to cycle the 30 km to the next village. It was a good ride, with the wind at our backs, and we reached our destination quickly. In the village (the last important one before the border), as we had no network with our SIM card, we asked the saleswoman of a small shop if she could share her internet connection with us (luckily we can always count on the helpfulness of Chileans). Finally, we were able to fill out the form for entering Bolivia and load the PCR test on it. At 4pm we left the village, but there was no vehicle in sight that could take us to the border. So we had only one way to go: by bicycle. At every vehicle that passed us, we stopped to hitch a ride, but either the car was too small or it was already full. One of them stopped anyway to offer us a bottle of water and ask where we were going. Finally they advised us to go to Estación San Pedro, where the police would surely take us in for the night. We arrived there at nightfall, but there was no police station in the village (only about 10 houses).

We asked a local where we could sleep and he advised us to put the tent behind the walls of the playground to protect us from the wind. On the way there, Matthieu saw an empty veranda of a restaurant and we decided to ask if we could sleep there with our mattresses and sleeping bags. The girl immediately agreed and to thank her we ordered a meal at the restaurant. We were promised spaghetti with eggs, but in the end we got a big piece of meat with spaghetti, fries, bread and we were even offered tea with our meal. While we were eating, the owner came to say hello and what a surprise, it was the same man who told us to put the tent behind the walls of the playground. We weren’t sure if he appreciated that his daughter invited us to sleep on the veranda of the restaurant while he told us to put the tent somewhere else, but after a few minutes of discussion it turned out that he was very nice. And at the end of the meal he even brought us a big mattress so we didn’t have to sleep on our little air mattresses. We fell immediatly asleep like babies.

It was a pity that the alarm went off at 3am, but we didn’t believe in the hitchhiking idea anymore and we still had 120km to the border and our PCR test was only valid until 12:30am. It was cold outside, luckily we put on all our warm clothes. We climbed gradually, but at night we had no orientation. After 15 km we had a small flat spot before the real climb to the altiplano began. At the same time, a cold wind came up and we lost a few degrees. On the way up it was still ok, the effort warmed us. But as soon as we reached the plateau, we were frozen. In fact, we couldn’t even drink anymore, our water bottles were totally frozen. But we still had an hour and a half until sunrise, it was a mental battle. The horizon cleared and we began to see the beautiful landscapes around us.  Then, just before the sun rose over the mountains, we arrived at a police station for a passport check. We asked if we could warm up a bit and have breakfast inside.  The policeman was very nice, he put the electric heater 20cm from our feet and offered us tea and coffee for breakfast. We stayed 45 minutes, much longer than our schedule allowed, but we needed triste pause so much.
After a short descent we reached a salar (salt desert), along which we cycled for the next 30 km. The road was flat and good, the landscapes were beautiful and the sun warmed us a bit, finally we felt better. Just before we left the Salar, we passed a lagoon with lots of flamingos. It was worth coming here after all!

We made a small ascent/descent before coming to another salar with an old goods train crossing in the middle. We made one last small climb, then finally we saw Ollagüe, the village at the border. We stopped at the shop to spend our last Chilean pesos, then we made our way to the customs. After a warning that we could not return to Chile if the Bolivians did not let us in, we got the stamp to leave the Chilean territory. We walked the 4km between Chile and Bolivia and then looked for a Bolivian customs officer (everything was empty). An old border guard came out of a hut and asked us for our documents. First problem: it was already 1pm, our PCR test was officially no longer valid. Second problem: we needed a paper copy of all our documents (which was not indicated anywhere). We started arguing and explaining that all triste was complicated by bike. He took us to another customs officer who explained the problems again, then they called their boss and asked what they should do with us. In the end they agreed to the PCR test but insisted on printing the documents.  In the absence of any other options, they agreed to print them for us, indicating that this would (of course) be at a cost. We didn’t really have a choice, so we complied with their terms as long as they would allow us to enter Bolivia. They connected the phone to the computer, but they couldn’t print out the documents. They talked in hushed tones about all the problems and the prices to pay, while we prayed silently that they would finally let us pass the border. Forty-five minutes later, the first document finally came out of the printer. Another 15 minutes and they were finally done and stamped our passports. We were free and couldn’t believe we had actually made it!

Just after the border, there was a small bistro where we ordered our first Bolivian dish to reward our efforts. After that, all we had to do was get to Uyuni to do the quarantine. There wasn’t much traffic, so we still had bad luck with the hitchhiking. In the end, it took us 2 days to do the 200km to Uyuni (80km by bike, 30km by hitchhiking, and 90km by bus). We were pretty exhausted when we got there, but we have the quarantine to rest and we can’t wait to discover this new country!

To see all photos, click here:
Arrival in Bolivia